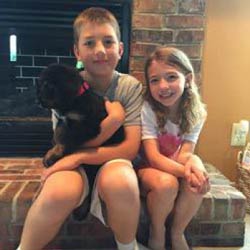 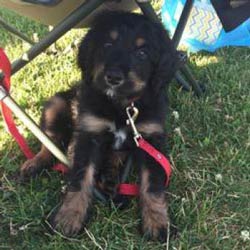 "Hi! Just a quick note to let you know how Zeke, a bernedoodle (formally Kirby) is doing. Can I just start by saying how much we all LOVE him!? He fits right in with our family! He is constantly with someone, if we walk out of the room he will whine until he gets our attention again! Although, the family misses him just as much when we are away. Our youngest daughter Scarlett, the one you may remember from when we picked him up was 'afraid' of dogs...well, she insists he wakes her up everyone morning with puppy kisses and as soon as I pick her up from day camp says "I missed my Zeke so much today!". He is a such a cuddler, especially with mom (total mommas boy)! But he is also very playful! His favorite game is tug of war although he just started playing fetch with his ball and loves it! He knows his name, is getting down some commands already (come & no, which we say a lot to this little chewer!). He is starting to pick up on the potty training and is hilarious that he will not go #2 anywhere except the front yard. We took him to our sons All-Star baseball game and he was the hit in the crowd and did so well meeting so many people...except in those 5 hours, he wouldn't go #2 even though he had to, until we were home and in the front yard. We sure did laugh at that! He LOVES to go for walks in the neighborhood and does so well on a leash. He stays right next to us. We did an entire mile yesterday and he wanted to keep going! He enjoys treats, sleeping on his back with paws up in the air and belly rubs! Oh and he barks when he plays or is dreaming...so cute! Thank you so much for our Zeke. He has completed our family and we just adore him!"
- Smith Family | July 2016 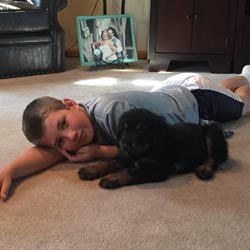 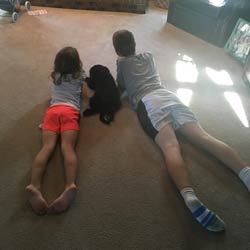 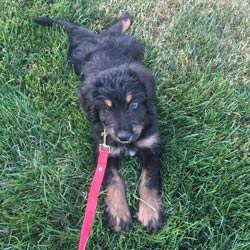 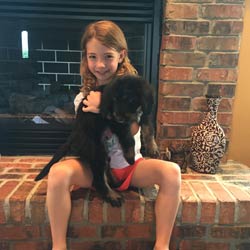