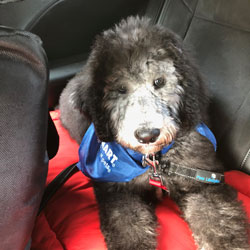 "Here is an updated pic. Sebastian had his first grooming today he is now sitting at 37 pounds. He is doing very well aside from roll over ( he still lays in a super dog pose) he has been picking up tricks and training well. His only quirk so far is he does not like watches. Thus far he has been an absolute pleasure to be around. He is turning more and more silver. He has lots of silver roots. The back of his back legs are fading out also. I get a lot of questions on his outings, about how such a senior dog can still be so puppy-like, Of course I say it’s easy he is still a puppy. He adores people! I’ve kept up with socializing, but you did a great job preparing him for the world, I don’t think he has even barked at a stranger, he always wants to run up and greet whoever he sees, I didn’t have any issues with trick or treaters dressed up and looking unusual. As of Monday when he got his final shots he was 35.5 pounds. He gained 17 pounds from the previous months appointment."
- Raymond | October 2018 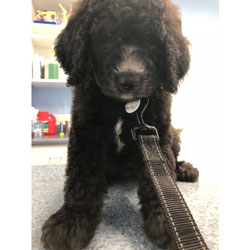 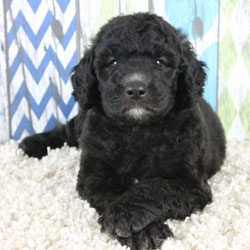 "Took Sebastian (formerly Julian) to the vet for his initial appointment all went great the vet said he was in excellent condition and concurred with your vet that he detects no genetic conditions. (Enclosing the invoice from the vet appt) Sebastian has been a quick learner (when he’s not napping) took him only two tries to learn to walk up steps ( down he is not all that excited about yet) He learned sit on Sunday and come on Monday. He has a great personality and temperament thus far seems very eager to please and be praised. Housebreaking is going well has only had a couple accidents since he arrived."
- Raymond | August 2018