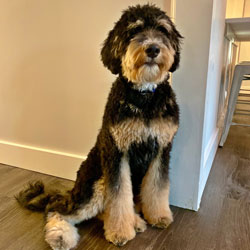 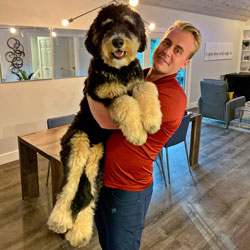 "Hi! Happy Fall! I wanted to touch base and let you know that Harbor continues to amaze us. He is such a good boy! We are still trying to figure out sources of some GI issues but his personality and appetite have remained unaffected. He is an incredible pup! These photos are after his first official grooming - 6 months and roughly 60lbs. "
- Joey | October 2019 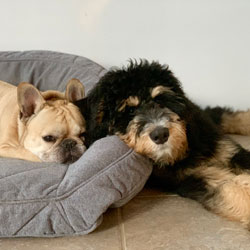 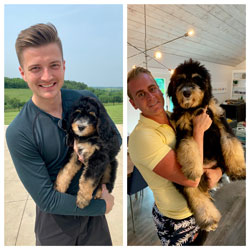 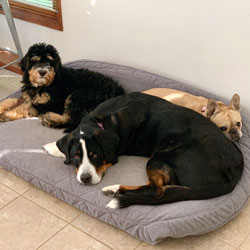 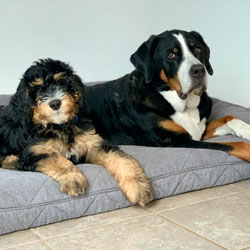 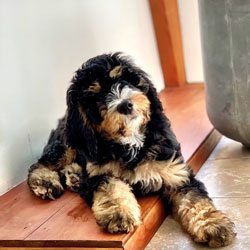 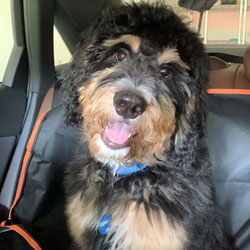 "Hi! I hope all is well! I wanted to send you docs showing Harbor has completed all of his vaccines. We have been keeping an open conversation with our Vet about getting him fixed; however, she is wanting to hold out longer as she believe it's better for their overall health. She said that if he starts showing certain behavioral signs, then we will want to go ahead and get it completed but he has been GREAT! We absolutely love him! His personality continues to grow and he is just an incredible pup! I have included a few more photos for you.

I did want to mention that we started having some issues with him having diarrhea and after all of his tests coming back fine, the vet put him on some antibiotics and diarrhea remedies, which seemed to help; however, it came right back when he finished the meds. She opted to do one more round just as a precaution even though again, he had no concerns in his tests/checkups. When it still did not subside, she asked that we stop the Nuvet wafers, which we did but he still had diarrhea and also some vomiting. We now are transitioning him from the RC Large Breed Puppy to RC Gastrointestinal and he seems to be doing better, but still not totally normal. His personality has not changed at all and he is still full of energy, he just seems to have some GI issues that we can not seem to pinpoint. I love our vet and she said she sees this often with doodles, but we are a little concerned to say the least. I have always used Fromm food with other dogs and am tempted to get him on it, but trying to follow instructions from the vet. I have spent A LOT of time researching dog foods as a result of this and ultimately want to get him on Fromm when we can. Once he gets normal again, we would like to continue with the Nuvet wafers as they don't seem to be the cause. Have you heard of this being common with Bernedoodles pups? I have been told that doodles in general have sensitive stomachs but we have kept him very regimented with food so it was a surprise for this to all of the sudden start at four months. Also, do you have any recommendations for online doodle forums where I can connect with other doodle owners? This is a new breed for me so I would like to be able to connect with others to compare stories, ask questions, etc. Thanks again! "
- Joey & Dustin | August 2019 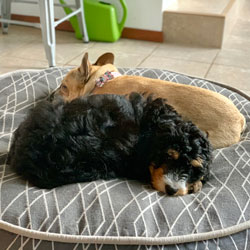 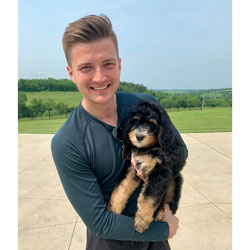 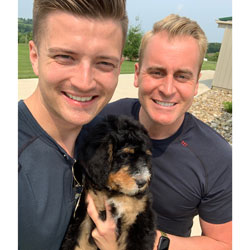 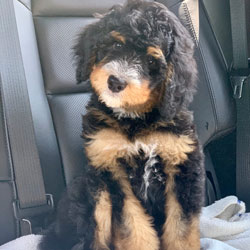 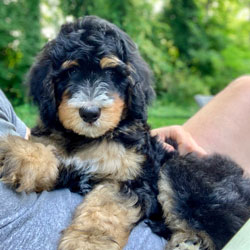 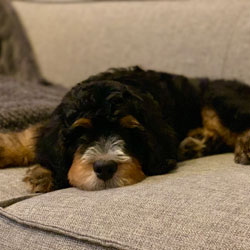 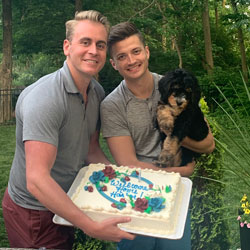 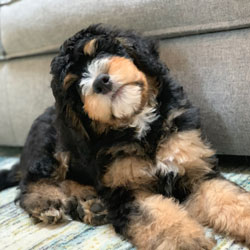 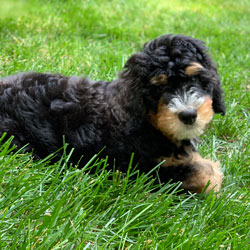 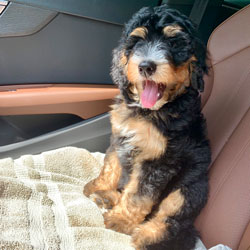 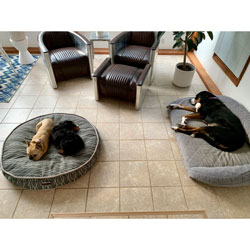 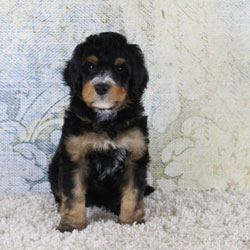 "Good Morning! Again we can't thank you enough for bringing Harbor into our lives! He is THE BEST! We are of course sleeping a little less but totally worth it! His temperament is perfect and he is getting along great with our 10yo Swiss Mountain Dog and 6yo French Bulldog. He is being crate trained but when he is out, he loves napping with the other dogs. Truly could not be happier with him! THANK YOU! Attached is the receipt from his first vet visit. Again out Veterinarian was out of town until this past Wednesday but we got him in as soon as she returned. We discussed neutering him and she said we can assess when we return to see her in three weeks. "
- Joey & Dustin | June 2019

"We can't thank you enough for bringing Tanner (now Harbor) into our lives!!! He was an angel on the 3 hr car ride home and is already learning his way around the house! We keep questioning if it's normal to have a new puppy and feel relaxed within the first hour you bring him home! You were a pleasure to meet and again, THANK YOU for making this process so easy and enjoyable! We did want to let you know that we have officially named him Harbor. Thank you and enjoy the rest of your weekend!"
- Joey & Dustin | June 2019