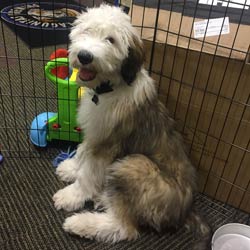 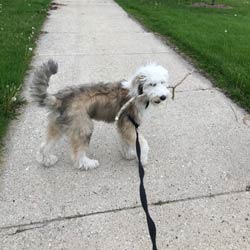 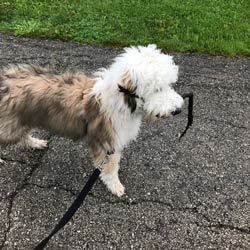 "George is doing great. He's lost all of his puppy teeth finally, which is such a relief for him, Jake and me, and our shoes, haha. He's a really sweet boy and gets along with everyone - people and dogs. He has such a sweet puppy smile and puts a big grin on everyone's face. We're hoping to get him certified as a therapy dog when he's older. He's entering is defiant stage a little bit, but he's still a sweet boy. He's responded well to training, too!

His coloring has gotten a lot lighter but he's still sable. We haven't gotten him sheared yet, and in fact we're hoping to keep him long. I'm worried he'll lose the dark fur if we shave him.
He's becoming a very handsome man. I can't believe how big he's gotten in such a short amount of time. I used to have to carry him down the stairs because he was too scared to go down them. Now I can barely pick him up and he just shoots down the stairs like a pro. Where does the time go???"
- Betsy and Jake | May 2017 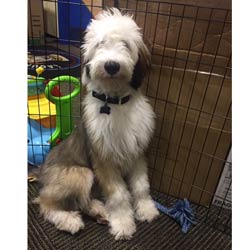 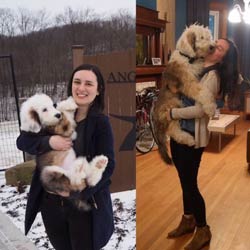 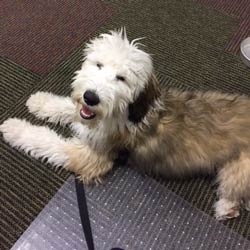 "George is amazing! He's already 20.5lbs, and he just learned how to go down the stairs yesterday. He's already learned come, sit, down and some basic leash manners. He took to his crate right away as well. He's a little puppy genius, and such a sweet boy.
The car ride home was surprisingly easy as well. He got sick once, but we expected that. We took turns sitting with him in the back seat, and he fell asleep in our laps the entire way home."
- Betsy and Jake | February 2017